It’s #OneWeek100People week! Hopefully you’ve got some people-sketching in already?

This week is looking extra challenging for daily sketching. So I’m doing as much as possible on the days I can to allow for almost nothing on other days. Here is a set of over 50 sketches done in one long sitting of 2 hours at my favorite coffee shop in my neighborhood, Blvd. Coffee. Blvd. Coffee now has fresh baked goods made on the premises every week, so when I walked in to sketch, I was in for a treat. I expected to just get to sketch cafe people but I got to watch pastry being made into croissants, cinnamon buns and much more. I sketched in an accordion fold book I had. 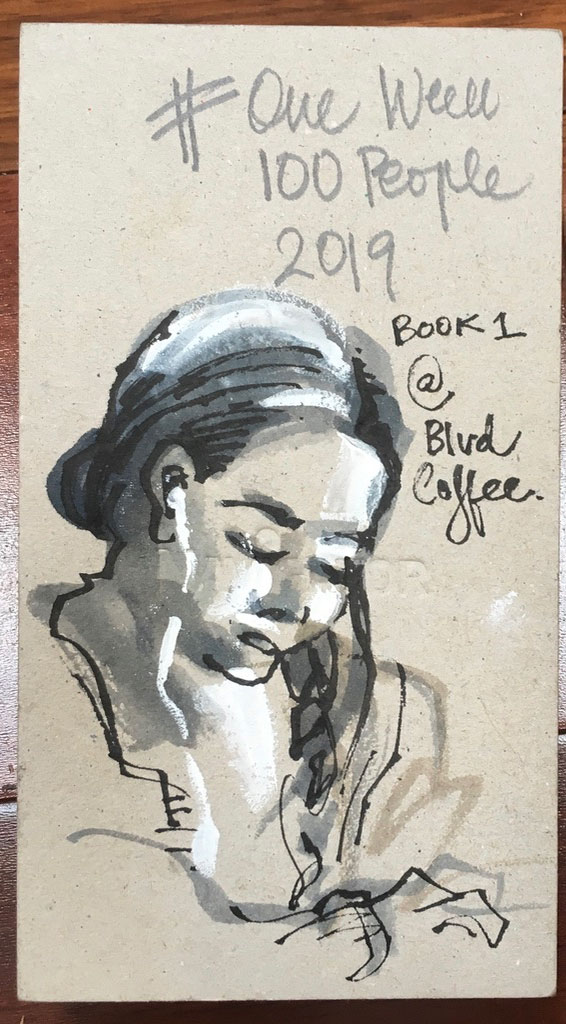 The paper isn’t the best for watercolor, but with quick sketches and simple washes, it doesn’t matter one bit. Here are some sketches from one side of the book:

And here are a few sketches from that second side of my accordion book:

A few random thoughts and observations from this session, mostly of things to work on and think more about:
I’m interested even in the littlest people-sketch in the story-telling potential of the sketch. So a cafe sketch isn’t just torso-and-head sketches. And telling stories without hands is losing half the story, because hands and gestures speak so much. So, note to self: Get back to those hand-studies!

Also about hands: Often, I start drawing someone because a gesture interests me. When drawing from life, you have to get to that gesture as fast as possible, especially if it’s a non-repeating one. Starting where the gesture is means I get to build the rest of the person after that, often drawing in a non-intuitive way (I usually start at the head, but it’s not possible in these circumstances). Lots more practice needed in drawing in this fashion.

Many people have been asking on the OneWeek100People Facebook Page about drawing in cafes and how to do it without attracting too much attention. And the most succinct advice came from Srivani: Keeping the bobbing head (looking up and down frantically while drawing) to a minimum helps to stay “hidden”.

More sketches in a post towards the end of the week. If you haven’t joined the challenge yet,it’s not to late to join and sketch a few people. Read more about it here.