Posted on November 2, 2018 by Suhita Shirodkar

If I’d looked at pictures of Mission Santa Clara de Asís online, maybe I wouldn’t be so surprised? But I was, because I went there for the first time last week and was surprised the church was pink. If you’re not familiar with California Missions, then you might not know they’re usually whitewash over adobe walls.

This piece is in a Hahnemuehle watercolor book. I like the paper, but it might be a wee bit on the thin side for me, given how much water I put on the page.

I wasn’t terribly disappointed by the pink church because I knew I’d have a go at a white mission building later that week. Liz Steel was visiting on her way to Sketchkon, and we did quite a bit of sketching all over the South Bay. San Juan Bautista is my favorite Bay Area mission. (technically, it’s outside the Bay Area, but it’s only a 45 minute drive south of where I live). It lies right on the San Andreas fault and standing in the square with the hotel and stables around it, you can imagine yourself transported back in time.

Here is my first sketch of the Mission and bell tower. This one is in my usual book, a 9×12 inch wirebound Beta Sketchbook.

I then did a quick little sketch of the bell tower in my other Stillman and Birn book, a 7×10 inch softcover Alpha. This is the book I’ve been doing my sketch journal pages in. You can see I planned to put more on the page from how I crossed over my sketch just a little bit over the fold.

On the left is Liz’ book, and on the right are my two. You can see a closeup of Liz’ sketches on her instagram feed.

Here is my Alpha sketchbook spread, finished later that afternoon over lunch. Even though sketch #2 is wonkier than #1, it does a better job of conveying that the building is white, something I worked on through the week. 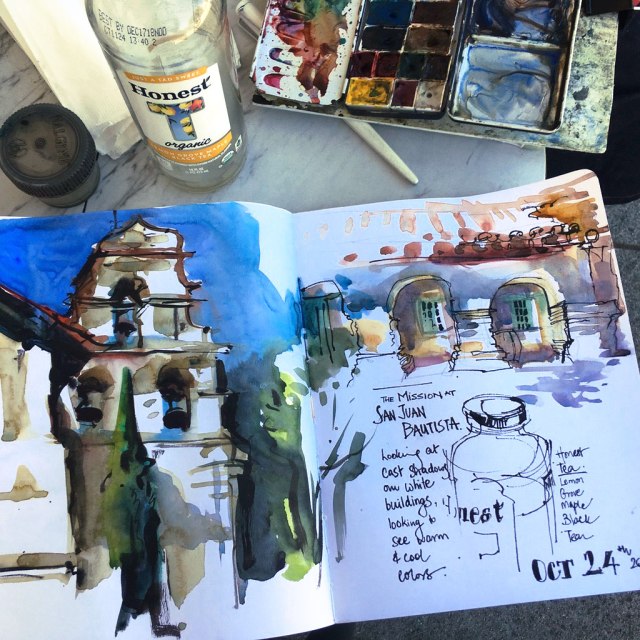 And then this Masonic Lodge on Second Street.