Tomorrow is the start of the 7th International Symposium in Manchester.. so exciting! I’ve been in the city for a couple of days watching people trickle in, meeting old friends, making new ones, checking out my workshop location, doing some test sketches, and trying to wrap my head around the huge brickwork and limestone buildings all over the city.

If you’re in the city, I hope we get to meet…If you’re not, these sketches and photos are so you can share in the excitement.

My workshop location is at the grand Central Library building. You’ll see lots more sketches of it over the next few days of workshops, but I’m hoping to do a different demo everyday to keep it fresh. Here’s two sketchesof it with people passing by.

Just behind the library at Albert Square. Beer, street food and Jazz at the Manchester Jazz Festival.

Everywhere you look, there’s buildings in red brick and limestone. Here are just a few,all with really quaint names.

The rain is never far away in Manchester, and you have to be ready to run for shelter if you  are going to stand int he street and sketch, like I was doing in the sketch below. The nice thing is, it’s an excuse to duck into a teashop anytime. And, I’m getting to use all sorts of colors in the sky: a real change from the clear blue California summer sky I’m used to painting.

Today Phil Griffin was brave enough to take a whole busload of sketchers on an architectural tour of Manchester: the football stadiums, the mills, the garment district and the ship canals. I told him my great grandfather studied in Manchester in the early 1900s, but I couldn’t trace the building, and he quickly figured that the building had been renamed and pointed it out to me on our tour.

Evenings are Drink & Draw sessions: This one at the Peveril of the Peak. 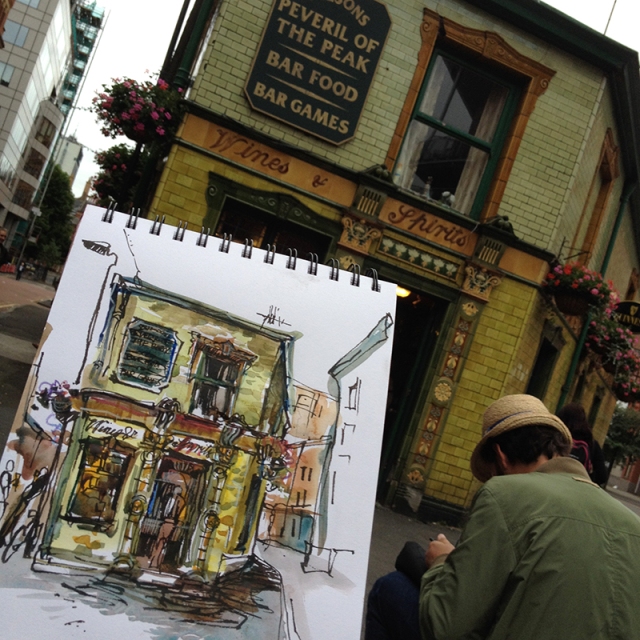 Best of all is sharing a city with hundreds of sketchers all crazy enough to sketch all day long. But I have been so busy saying my hellos I’ve forgotten to take pictures. I’ll try to remember tomorrow, when it all begins.