If the temples of Angkor are huge, complex, and really hard to capture, then Angkor Wat just takes it to another level. We’ve all seen this iconic structure in photographs before. But walking in through those gates is overwhelming. So overwhelming, perhaps, that the first sketch I did was of the view of the temple from outside the back gates.

My next two sketches were smaller vignettes. This one in the inner courtyard.

And this one of a monk in a small part of the temple that is now a living Buddhist temple.

To see some amazing sketches of the space and scale of Angkor Wat, see Stephanie Bower capture it.

These next sketches are from a second trip to the complex. Another few captures of the inner courtyard, filled with tourists and monks. 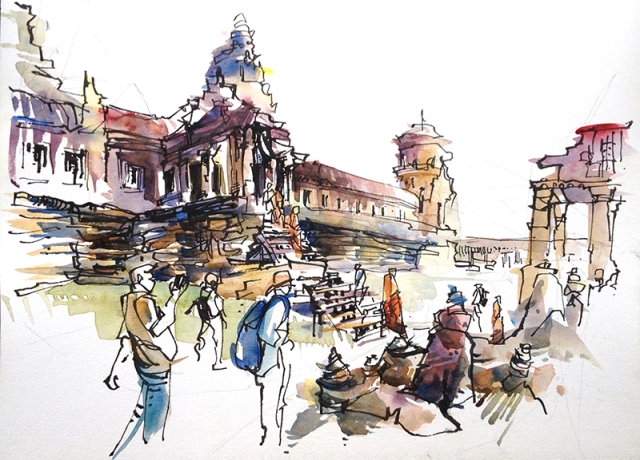 See that brush on the top left of my page? Best-est gift ever, the Rosemary Dagger Brush: it’s quickly become my most-used brush. An incredibly versatile brush that makes really expressive marks, but that’ll have to be another post…

What works for me is people-filled scenes. When I try to draw just the architecture, it rarely comes alive. So here is more of that monk at the temple and a huge statue of Buddha.

And I thought this was one last, mad capture as I hurried out: tourists by the ponds taking pictures of themselves with Angkor Wat reflected in the water.

But then I had to stop for this: How can you not draw the palm juice seller who holds this pose (and smile) for you? That hollow bamboo hanging from the palm is a sort of strainer for the sweetish juice.

More from Siam Riep coming up next, this time from the Crafts Village.