Cambodia: the temples of Ta Prohm and Angkor Thom

A full day of sketching the temples around Angkor. Take big, complex, layered and textured  stone structures. Throw in a cloudy day with diffused light and it’s quite a challenge to try and figure what to focus on and draw.

Our first temple visit was to Ta Prohm, most famous for the huge ficus trees growing out of the structures. This first sketch I did is probably of the most iconic place in that temple. Wish I’d done it a little later in my trip because it takes a while to sort out what’s going on in a new environment, and this was sketch #1 at the temples. And what an imposing site it was! (See Shari Blaukopf’s sketch of it that captures its scale and magnificence so well)

After this one, I decided I needed to do a couple of little pieces, so I sketched the workers who were part of a restoration project. Some built scaffolding around the structures, others painstakingly cleaned the remnants of carvings in the stone. 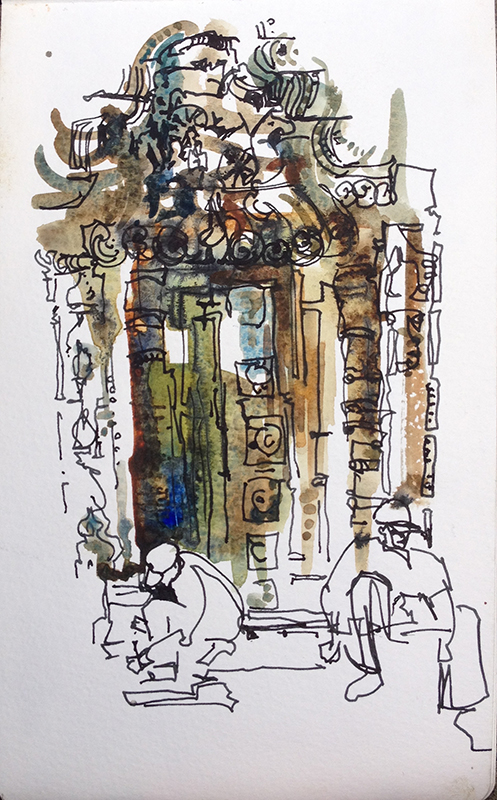 Then I walked around the corner and just had to capture this monk photographing the ruins with his phone. Yes, it’s the “ancient meets modern” cliché, but I had to sketch it. Everywhere you looked, great crumbling stone structures were so intertwined with the trees that the trees now held them up. It’s hard to imagine how these structures must have looked when they were living temples, all painted and adorned in gilded wood.

After a short break for lunch we headed out to Angkor Thom where I sketched the giant face towers at the Bayon. There are over 200 of these massive faces on the towers, although many of them are barely recognizable as faces.

I can usually sketch all day, but in the heat and humidity of Cambodia, I was totally done at this point and headed back to the hotel after laboring over a small sketch of the tuk-tuks for far too long.

So glad I headed back, there is just no way I could have sketched anymore that day.
Well, except for this little piece produced later that evening at the hotel. I don’t know what these little lettuce-like water plants are but they floated in a pond at the hotel and were fun and relaxing to sketch.

Coming up next: A break from temples to capture life in the markets of Siam Riep.

5 Responses to Cambodia: the temples of Ta Prohm and Angkor Thom