Posted on August 6, 2014 by Suhita Shirodkar

Of all my recent travels, Costa Rica has been the hardest place to capture in sketches. For one, we visited in the rainy season. It rarely ever stopped pouring for more than a few minutes. And, we hiked, river rafted, ziplined and were generally on the move. Add that to the rain and it’s hard to whip out a book and sketch. And then there was the extra challenge of being bitten by bugs. No amount of bug spray and long pants kept the bugs and mosquitoes from eating me alive if I stood still for more than a few seconds.

So did I sketch? Yes, but there’s not one sketch of the incredible cloud forests or of the layer upon layer of vegetation of the tropical rainforests. Instead, I drew the little stuff. The plants, the ducks, a single coconut, things that captured my eye, things I could sketch between cloudbursts.

Like these strange looking Muscovy ducks that inhabit every pond in Costa Rica. With their red, bubbly, plastic-looking face markings, they are quite a sight. And like many creatures that live too close to humans, they are pretty aggressive in their demand for food. 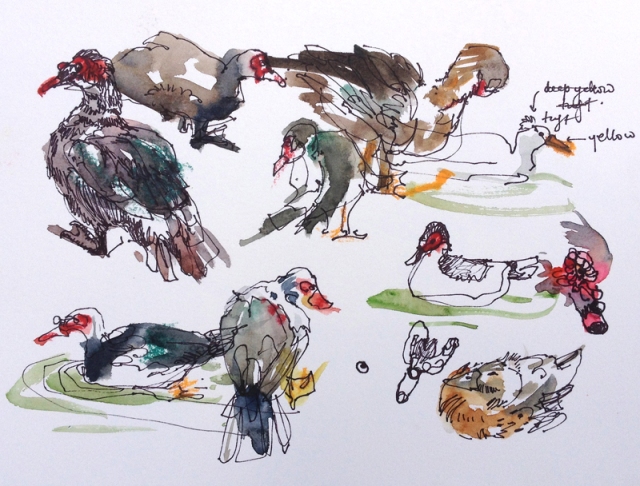 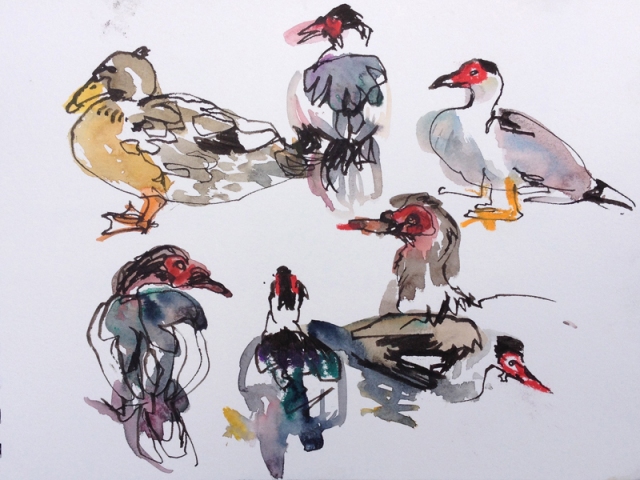 All those ornamental plants you might struggle to grow in your home? They grow and thrive all around the place in Costa Rica. I guess anything can grow in a place where the average annual rainfall is 250 inches!

Tortuguero is a long, thin strip of land off the North-East Coast of Costa Rica, surrounded by the Caribbean Sea. We reached it after a few hours of a very bumpy bus ride (all rides in Costa Rica are bumpy) followed by an hour long boatride through narrow waterways surrounded by the jungle. We spotted sloths, caiman, black vultures ( about as common in Costa Rica as crows are in India) and countless other birds and animals. My favorite? A tiny lizard called the Jesus Lizard. Why? Because it walks on water.

These coconut sellers wore strangely shaped hats made of coir. I was drawing the guy on the right at his cart, but this other guy really wanted to be in my sketch. He made his way into my ‘frame’ and stood and smiled. How could  not draw him? 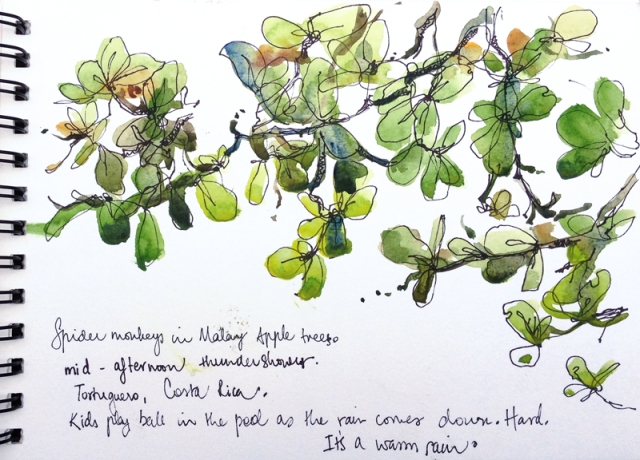 And a coconut on the black sand of Tortuguero beach. The red spindly thing? Probably a washed up ficus rootlet.

Speaking of ficus, Costa Rican forests are full of ficus, some with giant roots. If you look carefully, you’ll spy my son Nishant sitting among the roots of this tree, reading a book. He didn’t sit there long, though. A couple of minutes in one spot, and an army of leaf-cutting ants marched right over his feet.

More sketches and stories from our travels soon. Can’t wait? All my sketches ( sans stories) here on Flickr.