Posted on November 23, 2011 by Suhita Shirodkar

Every weekend, Jun Pei Cui sets up a little table with a very powerful table lamp outside the Museum Store at the Asian Art Museum in San Francisco. Jun Pei Cui is a Master Seal Maker, and author of the book ‘The Art of the Seal‘.

I watched him at work on a small square seal. First he helped his customer choose an uncarved stone base for the seal: a long ‘stick’ of soapstone with a square or round end, and a carved top. Then he asked what the seal should say. This seal had a young girls name on it. After making a quick little sketch, Jun Pei Cui  got to work carving away between the letters for the next hour. I assumed he’d have to transfer the pattern onto the base as a reference, and was amazed that he didn’t- instead, this Master Seal Maker just looked up from the soapstone block every so often at the little sketch before him and carved away. Once the piece was almost done, he dipped it in vermilion ink and tested it. A few more finishing touches and the seal was ready. I asked Jun Pei Cui to stamp the seal on my sketch. You can see it on the right of my sketch. He said it was a simple seal.

And when he was done, I asked him to make me one. Next week, I get my own seal I can stamp on my sketches! 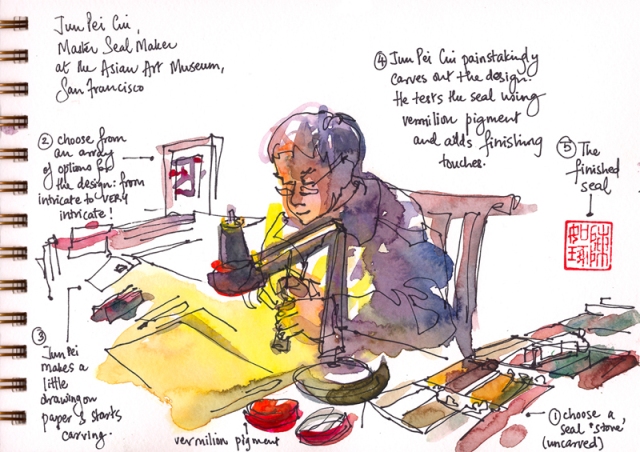 6 Responses to Portrait of the Artist: Jun Pei Cui